Katherine Bradford    Liner Pointed    Paint on Plaster and Wood, 8 x 4 x 6 inches, 2010
A vital resource, and a natural element, water is at once physical yet formless, transparent yet reflective.  Katherine Bradford  provides form to contain it, imposing shape, surface, and volume - and metaphorically soups it up.

A very small piece will control you.

Bradford's water-based imagery jettisons forward a degree or two in her current show, Ocean Liners, at Aucocisco Gallery in Portland, Maine.  The exhibit includes both large and small paintings, works on paper, a video and handmade objects. 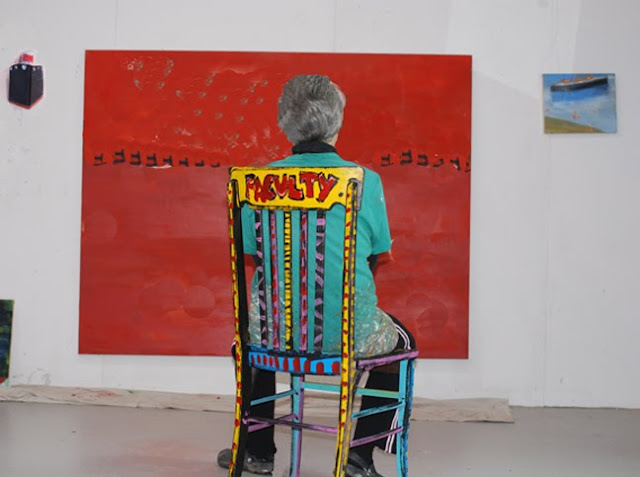 "In my painting studio (at Skowhegan 2009) with chair painted by one of the participants."
In her own words:
“While at Skowhegan everything started to look like an Ocean Liner – the chips of Styrofoam used to test the fresco, the hunks of wood on the floor of the sculptors’ workshop and the pointed pencil holder I found stuck to the wall of an abandoned studio. I added paint and smoke stacks and eventually these objects became the props for a video about the story of the Titanic.

"Since everyone knows the plot I felt I could be as playful as I wanted with how the story is told. The climatic scene, for example, takes place on a snowy sidewalk in Brooklyn; other scenes were shot in a tub of water filled with ice cubes. It seemed the best way to show the smallness of this great Ocean Liner that eventually proved to be so vulnerable in the open seas."


It is a matter of tension and control. When we see objects constructed from familiar or found materials, we think we know what they are. Bradford fools us into believing her story. We sense familiarity when in fact we are "vulnerable in open seas".   Much like the individual confronted by the immensity of the universe, or the existential loneliness of the long-distance dreamer perched on the edge of nothingness, we are transported into Bradford's fictitious and illusionist pictorial space.

"....We can’t figure out exactly what is going on. The longer we look, the more suggestive Bradford’s abraded brushstrokes, dabs, irregular patches and scumbling become. It’s as if we have entered a trance-like state that is similar to the one possessing the figures in her paintings. Bradford knows her medium well enough to trust it, and, more importantly, to let her marks become evocative without nudging them into an easily definable realm...."
- John Yau, Katherine Bradford by Life and Land, Recent Paintings, The Brooklyn Rail, June 2007 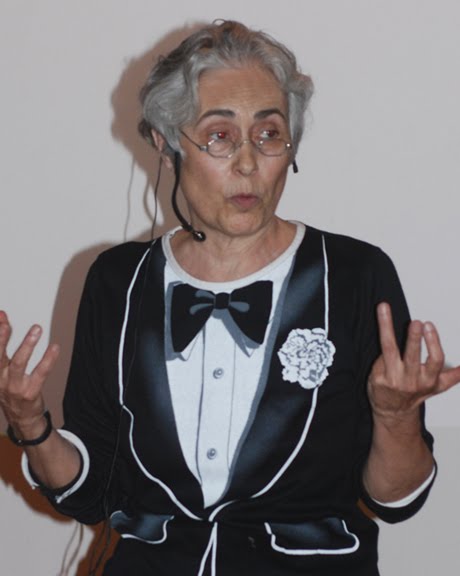 "Just before I gave the talk on my work, I am wearing the mike amplifier and a faux tux (Skowhegan, 2009)."

Katherine Bradford was born in New York City, graduated from Bryn Mawr College in Pennsylvania, and received an MFA from SUNY Purchase College in New York. 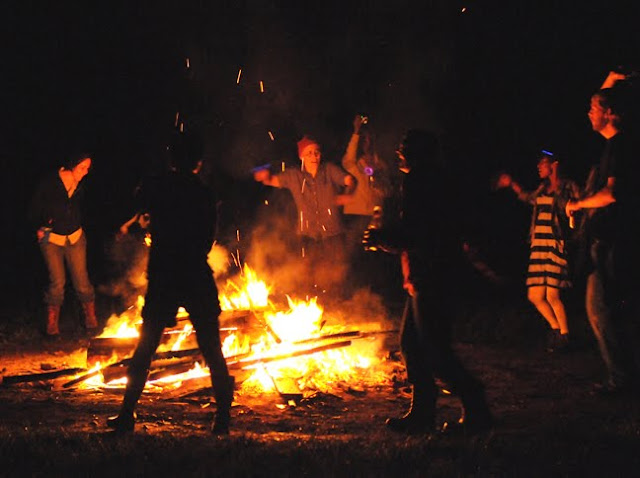 "My favorite time at Skowhegan was this dance around the bonfire.  I am wearing a red cap because it was drizzling rain."

In the 70’s, Katherine Bradford was living year round in Maine and began to make paintings that were abstract, taking inspiration from nature.  Gradually she introduced images and symbols into her work so that at present her paintings exist in an area between abstraction and representation. 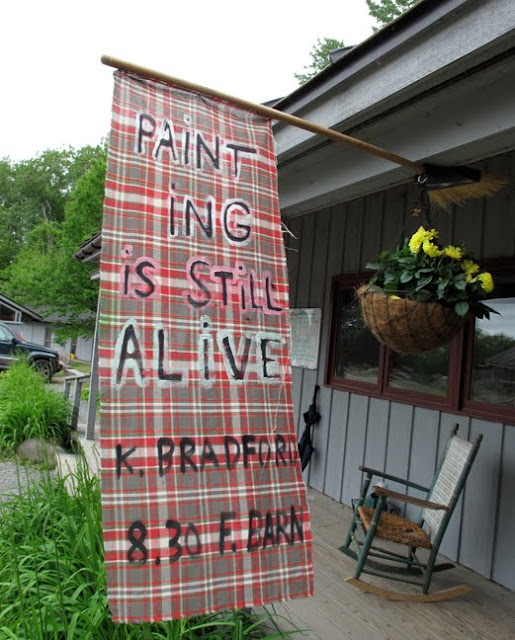 Bradford teaches at Pennsylvania Academy of the Fine Arts in Philadelphia and Manhattan's Fashion Institute of Technology. She is the recipient of a Pollock-Krasner Foundation grant award. Her work has been exhibited in galleries in New York, Chicago, Boston, and Maine, and is represented in the collections of the Metropolitan Museum of Art, the Brooklyn Museum and the Portland Museum of Art.

Just had the thought that it would be a lot of fun to take part in a residency together some time down the road.

A chance to dig deep.

Kate thanks for this post. I am in love with Katherine Bradford's work!!!

Thanks, Willy, and Pam.

Here is a very good review of Kathy's work, including the Ocean Liner show:

Love the boat work but the banner is pretty funny...