Color as it Happens :: Steven Alexander and Willy Bo Richardson

Color as light and form. My own conclusions fall within a spectrum of black and white, and geometric shape - an architecture that I find astonishingly complete, yet in which viewers often suspect other color is lurking.  This is not so: the repetitive striations of my drawings are strictly monochromatic.  It is an illusion, and an example of how the color we see is very personal, defined by an accumulation of associations, thoughts and memory - as well as wavelength.

Aside from my own aesthetic priorities,  as an artist I am continually moved by the power of a full spectrum - what actually happens between colors, and that transformation at the hands of a sensitive, skilled colorist.  Here are two I know, both experienced, both who use color deftly and in very different ways but within a shared language. 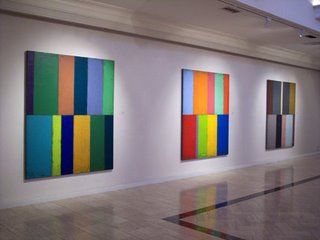 In his own words:

"Sometimes the studio can be a fairly raucous place. Sure, there is plenty of time spent sitting, staring at stuff in progress, waiting for the motivation, energy or clarity required to make the next move. 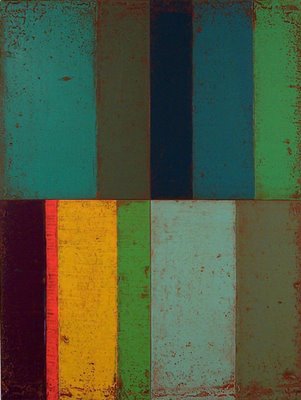 "But when things are in motion, it becomes a place where much happens at once, and where actions are often accompanied by a din of sound - thick, layered and pulsating, moving in and out of focus - symbiotic with the labor, the color and viscosity of the painting process. Recently addressed works in progress lay drying under large fans -- the more stuff to dry, the louder the dense hum of the fans. The louder the fans, the louder the music - overtones of both combining and colliding to form disembodied drones. Often during a cycle of work, one piece of music will be played over and over for the entire duration - the repetition seeming to deepen the focus - the music sustaining a specific poetic relationship with the decisions being made.


"But then, at a certain point in the process of each painting, it is necessary to completely change the atmosphere. Guston once talked about the the whole laborious painting process leading up to the final fifteen minutes when everything comes together. Well, it may be more than fifteen minutes, but the final stage of each piece is indeed where it all happens - the culmination, the payoff - and it is the most relaxed and satisfying part of the process. That's when the music and the fans are turned off - when a different, more acute focus kicks in. There is only the sound of the trowel sliding across the surface, the taps and clanks of tools and paint buckets on the table as they are chosen, discarded, shuffled around - a subtle awareness of the sound and rhythm of my own breathing and the scuff of my shoeheels on the concrete floor. In this zone, several hours can pass in an instant -- and the expanse, the stillness, the silence that is the essence of painting becomes a physical presence in the room. 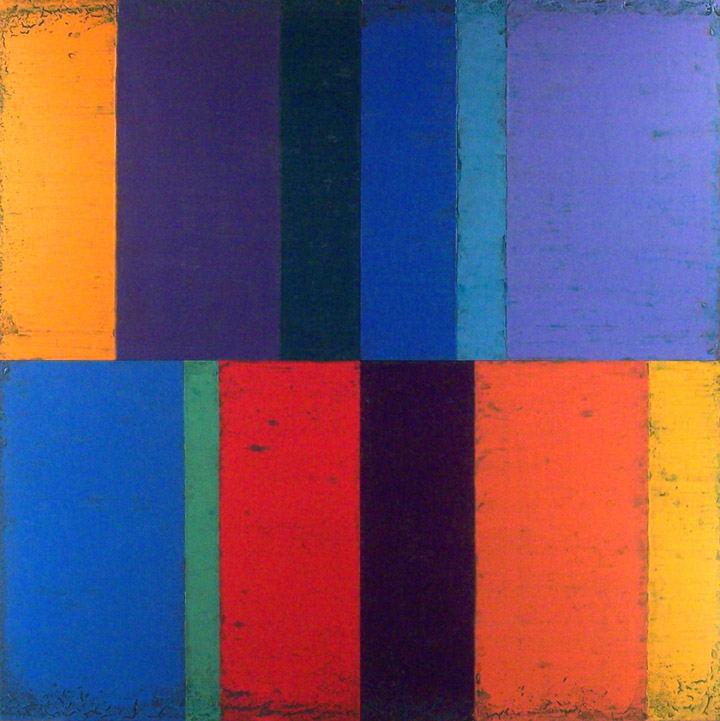 "My work is an exploration of relations that reside in the constant flux of pure sensory events. I am interested in the interaction between the painting and the viewer's imagination and experience; in the painting's catalytic potency - it's potential to generate unspecified mobile meaning.   Color operates in this work and in the world as a kind of pure energy, dynamic, capricious, evocative. The surfaces emphasize the sensual rather than analytical nature of the painting process, and attest to the pervasive presence of time. Within the structures of the work, archetypal relations of male/female, earth/sky, internal/external are inevitably implied; not as opposing forces, but as interdependent aspects of an animate whole. In this sense, the paintings might be regarded as open-ended cosmologies, or as chunks of raw reality, unencumbered. 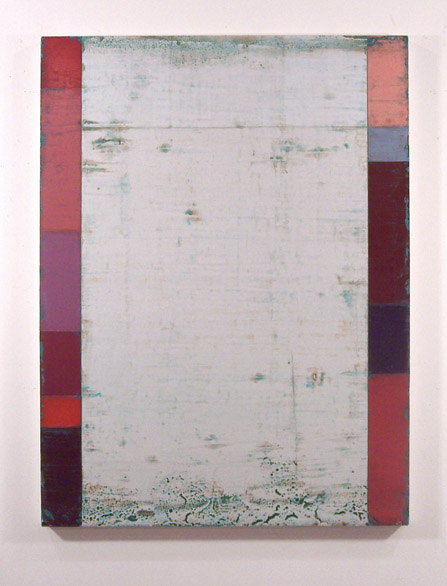 I am trying to build, out of color and substance, a place for the viewer's consciousness - where unexpected associations and resonances may occur, where past and future merge with the present moment, and the stuff of life, love and desire has corporeal presence - states of being, embodied in paint. " Steven Alexander 2009

Willy Bo Richardson is an abstract painter living and working in Santa Fe, NM.  His work can be seen at William Seigal Gallery in Santa Fe, Gallery Sakiko and Nohra Haime Gallery, NY, New York, and Fresh Paint Art Advisors, Los Angeles, CA.  Several months ago, we were fortuitously connected by a gallery in Santa Fe because of notable similarities in our work.  What a nice find.  I have been moved by his translucent surfaces of veiled color, and sensitive use of scale.  And by his own articulate meanderings about his work: 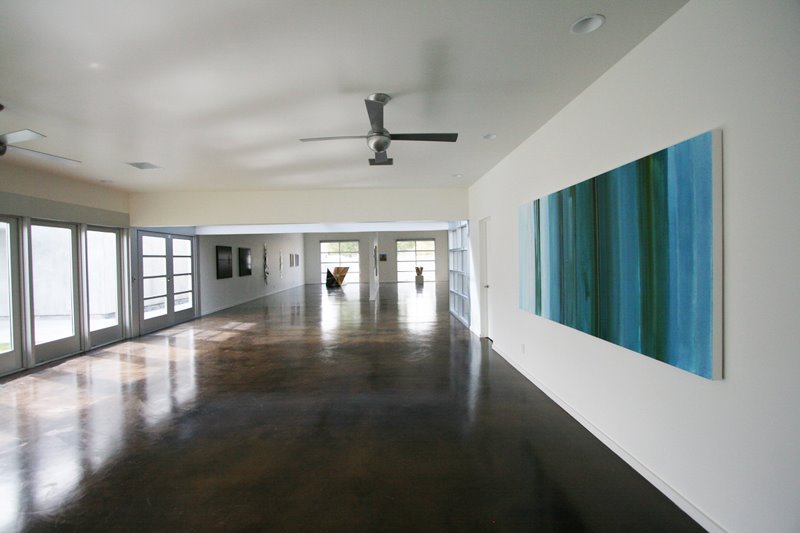 "Natural surrounding is important. I have a love/like relationship with NM. I like the desert, and sometimes really crave it, but generally head for the mountains. Skiing is incredible in Taos. You can also hike up from the last chair to mountain peaks -- a snowy mountain with Tibetan prayer flags is actually up in Taos.  In the summer a good hike will be enough to look out to the distance, and that's where the desert, along side mountains is really lovely. 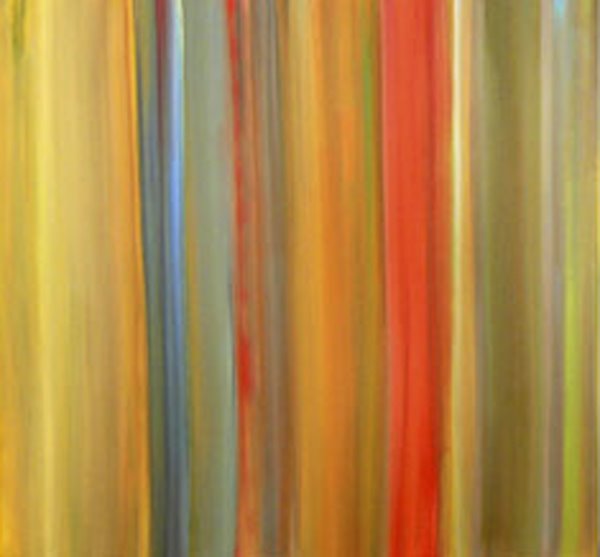 "And that's where my paintings come in- spaciousness. I try to digest it and put it out for others. Paintings can be like doorways or at least windows to physical locations and more. 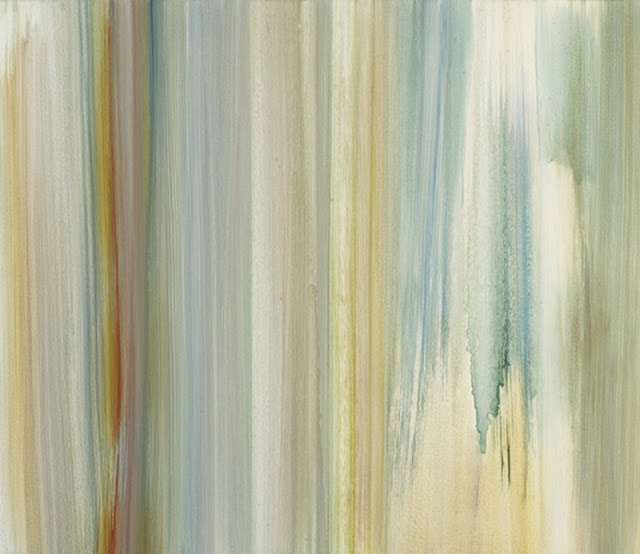 "Of course, the paintings are not landscapes - strictly places.

"The idea of painting is an adaptation. It’s something that our culture can relate to. It has a certain format. Within a frame, within a context. It’s a way of taking an abstract moment, a color, an experience and putting it into a culturally digestible format. 40,000 years ago, humans were painting on the walls of caves. The painting as we know it today is a recent invention, but it's purpose stems back to humans' earliest civilizations.


A single color is hardly ever unconnected or unrelated to other colors. Color exists as a matter of context, relating constantly to its changing environment. Light. Form.