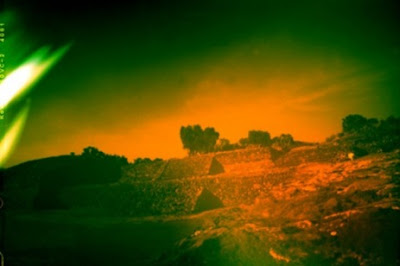 I recently heard from artist and friend, Liz Doles, who finds herself teaching in Nepal for the winter. Liz is a painter who also takes extraordinary photographs with a pinhole camera. 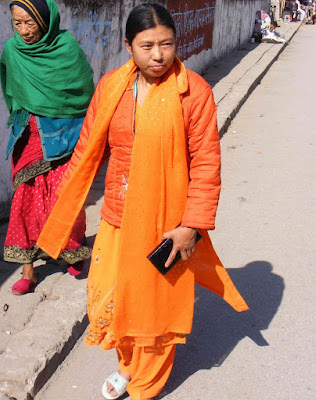 Liz Doles Digital Image Nepal, 2009
We met as fellow residents at the Vermont Studio Center last fall. I asked , "Why Nepal?", and she sent the following words and images*:

"While others may come to Asia to benefit from Ayurvedic healings, to give rein to unrestricted illegal drug use, to immerse themselves in esoteric Buddhist learning and Hindu spirituality, to shop, to ascend Earth’s highest peaks or drown in guilty sexual pleasures, I came for the color combinations. 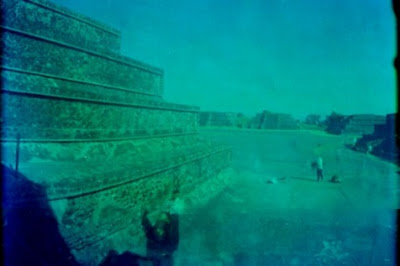 Crushing color in landscapes of fabulous filth. The extraordinarily brilliant dress of the most ordinary Indian and Nepali women. 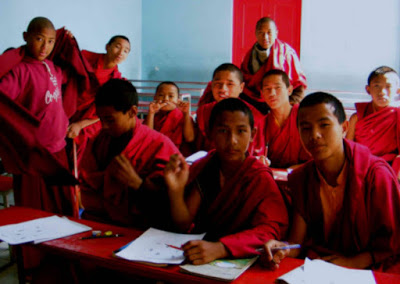 When I walked into the classroom in the monastery and saw its robin’s egg blue walls and crimson doors awash in winter sunlight, the young monks, their lithe, adolescent male bodies draped in maroon, their brown Newari faces with chiseled cheeks and chins, their dewy eyes and plump little pillow lips, Hollywood white dentition and cropped black tonsures, seated erect at benches that extended in parallel rows to the back of the classroom, I fell in love." 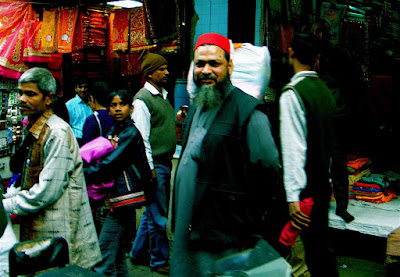 A pinhole camera is very simple: it is a light-proof box with a small hole in one side, no lens and a single, tiny aperture. Light passes through this single point and projects an inverted image on the opposite side of the box. The camera's shutter is manually operated and consists of a flap of light-proof material to cover and uncover the pinhole. Typical exposures range from 5 seconds to hours and sometimes days.

Though slow shutter speed may make for a typically lesser defined image, there is nothing at all obscure about Liz' color. The opposing tension of richness of hue and subtlety of line is very intriguing.

* The pinhole camera images I have included are not from Nepal as Liz has not been able to travel to Beijing to have her film developed. She sent these more traditional Nepalese digitals of her experience, which when pared with the pinhole images from Mexico, illustrate well the impact the culture, and color, is making on her.